Thermoelectric cooling, is a solid-state method of heat transfer through dissimilar semiconductor materials.
It is also called “the Peltier Effect” after the French watchmaker who discovered the phenomenon in the early 19th century. Like their conventional refrigeration counterparts, thermoelectric cooling systems obey the basic laws of thermodynamics. However, the actual system for cooling is different.

In a conventional refrigeration system, the main working parts are the evaporator, condenser, and compressor.
The evaporator surface is where the liquid refrigerant boils, changes to vapor, and absorbs heat energy. The compressor circulates the refrigerant and applies enough pressure to increase the temperature of the refrigerant above ambient level. The condenser helps discharge the absorbed heat into surrounding room air. 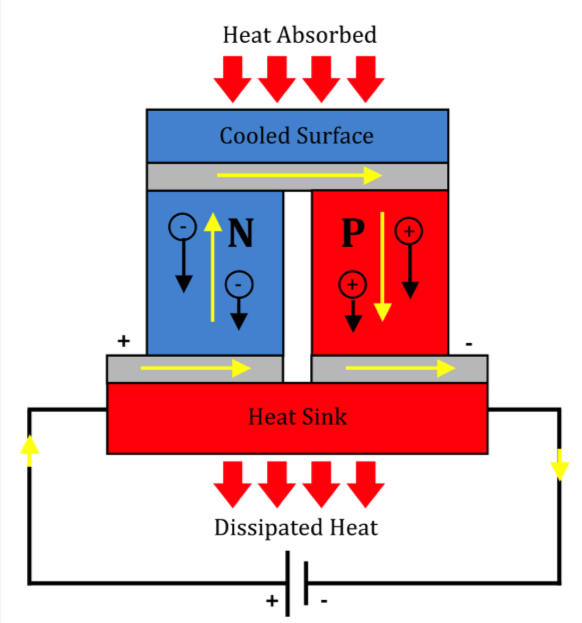 The three main working parts in a thermoelectric refrigeration system are a cold junction, a heat sink, and a DC power source.
Two dissimilar conductors replace the refrigerant in both liquid and vapor form. The cold sink (evaporator surface) becomes cold through absorption of energy by the electrons as they pass from one semiconductor to another, instead of energy absorption by the refrigerant as it changes from liquid to vapor. The DC powersource pumps the electrons from one semiconductor to another, and the heat sink (condenser) discharges the accumulated heat energy from the system.

Therefore, the thermoelectric cooling system refrigerates without refrigerant and without the use of mechanical devices, except perhaps in the auxiliary sense.
The semiconductor materials used in thermoelectric cooling are N and P type, named because they either have more electrons than necessary to complete a perfect molecular lattice structure (N-type) or not enough electrons (P-type). The extra electrons in the N-type material and the holes left in the P-type material are called "carriers," responsible for moving the heat energy from the cold to the hot junction. Good thermoelectric semiconductor materials such as Bismuth Telluride greatly impede conventional heat conduction from hot to cold areas, yet provide an easy flow for the carriers.